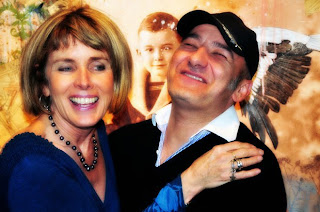 Alexandra and Predrag are some of my newest friends but THEY have been friends forever....I met them both in London during a show I was HONOURED enough to be a part of called 'Lingering Whispers" http://thepandorian.com/whispers/.....They both met me with open arms and hearts and with a warmpth and familiarity that only comes from long years of close friendship...I went to London alone to participate in my first art show and was feeling excited and a bit nervous....but Alexandras motherly energy and Predrags infectious smile kept me going!!! It is a pleasure to rank them among my friends!!!!

..They have currently been collaborating on a project togther called "There is no such thing as the end"....a series of photgraphs...artworks and film....here's a little description they included with the works...."About 20 Victorian glass plates were discovered in an attic of a stately home in Texas. Once meticulously cleaned from 100 years of dust, they revealed images from a portrait studio of astonishing beauty filled with haunting charm and mystery… This project is a contemplation on death, as well as life’s delights in life…." Aleaxandra was joined by Predrag on this project...images were printed on Chineese scrolls and silhouettes were painted and embroidered on top transforming them into dreamlike scenes inhabited by minature deer, frogs and insects of all kinds!!!!!! There is also a set of photographic images with minature tableaus featuring broken dolls, small toy animals, ribbons and delicate butterfly wings!!!!! I am blown away by the images and by the energy of these two freinds work!!!!!

So...included for your viewing pleasure are some images of the photgraphs and artworks and a link to the Pandorian site with even more images!!!!! 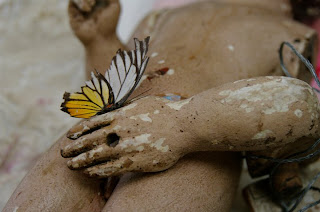 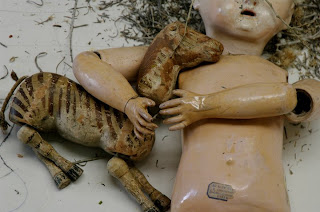 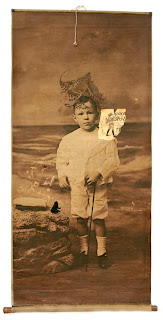