Kohei Nawa was another amazingly talented artist I saw at the Japan Society show 'Goodbye Kitty"...His work is broken up into secions called "Beads', "Liquid", "Prisim", "Scum"....MY favourite {and the one shibited} is from beads...heres HIS description from his website "By covering surface of an object with transparent glass beads, the existence of the object itself is replaced by "a husk of light", and the new vision "the cell of an image" (PixCell) is shown."...It results in an amazing distortion of the animal while still leaving it's original form...The piece for the show was created specifically for the show and features a HUGE deer...A friend told me it actally weighed a few tonsnd some of the 'beads" were rmoveable so the piece could be transported.....just stunning.... 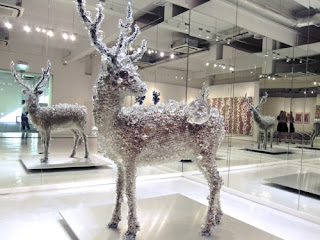